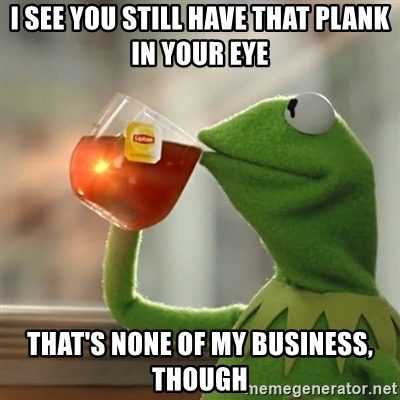 There was a Christian rock band in the 90s called Plankeye. Always thought it was a clever name for people who see the splinter in others’ eye.

Ouch. Turns out it’s me. (I hate it when that happens.)

Words like hypocrite, sellout, and partisan politician are all easily tossed at others, and often accurate. But it’s extremely difficult to accept those words about ourselves. We might acknowledge it privately in theory, but something causes us to quickly call out shortcomings in others.

When I see posts espousing views I disagree with, I want to counterpoint. I’ve given that up. It solves nothing. It only worsens. Conversely, on controversial posts I agree with, it’s easy to “like.” But what am I accomplishing?

The Gospel has always been true. It’s no less true today. With all the distractions, let’s focus on the primary thing. There’s God, who is Love. There’s also Satan, who deceives. He often uses quarreling and dissension as his most horrible device.

God sent His son Jesus to oppose the pride and egoism that Satan promotes. He ultimately sent Him to die for it, declaring victory over the evil pride of the enemy.

Satan still prowls the earth, luring many, But in the end he knows he can’t win. Christ’s return to earth will establish his Kingdom for eternity!

That’s exponentially more important than anything else my finite mind tries to prioritize. Regular reminders are essential.

Dang. There it is again. That giant plank returns so quickly.

Excuse me. It’s time for my morning surgery.